There are a number of reasons why you might choose a particular cell-phone and the network it operates on, but for me, the biggest and first reason is the coverage you get.  That is, can you make calls and connect to data everywhere you want to.  If you live in Cobourg, you will be primarily interested in coverage there and only secondarily in other places like Toronto.  The best way to decide coverage is to try it out in places that matter - like inside your home - but that's not always possible before you buy.  For more on the coverage of each supplier, see below.

First, although there are four major Networks - Bell, Rogers, Telus and Freedom - Telus and Bell have a roaming agreement so that in areas like Cobourg, Telus operates off the Bell network. Mid size player Koodo operates on the Telus Network (see the Bell towers).  For the small players, currently Virgin Mobile, Solo (no new customers), Public Mobile, Lucky Mobile and PC Telecom use the Bell Mobility network, while Fido, Petro Canada, Simply Connect, Chatr and Cityfone use the Rogers network.  So for Cobourg, we need only be concerned with Bell, Rogers and Freedom Coverage.  Map below is effective December 2022. 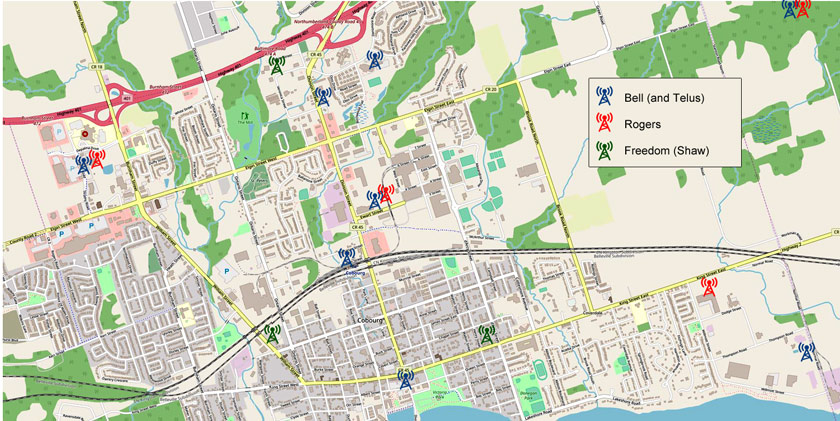 All of the Bell, Rogers and Freedom towers provide LTE service.  Both Rogers and Bell provide 5G service in Cobourg although that only helps if you have a 5G capable phone.

Note that coverage is only one reason to choose - price (including bundling), service and "who you want to deal with" are other factors.  But since this is primarily a technical page and coverage is technical, only differences in coverage are shown here.

The map makes it clear that coverage by Bell is significantly better than Rogers in Cobourg (although some Bell sites may have been built to provide capacity). This is especially true in the downtown areas. Freedom looks OK except for the far East End.  It's not possible to say exactly how close you must be to a tower to get coverage but it is safe to say that more towers and a tower closer to where you are means better coverage. If you never use your phone indoors, all three networks will be good - it's when you go inside that the difference would be apparent.  Even then, you may be OK on Rogers. That's especially true if you live in a third or fourth floor apartment, or in Cobourg near the middle of town.

For more on Cellphones and the source of the map, go to this page by Steven Nikkel.  See also his phone apps - Tower Locator (Canada).