Broadband/High Speed (Major ones in Cobourg Area only)

Listed below are not necessarily the best services offered (all suppliers have other options) but chosen to be comparable so prices can be compared.

In addition, you can get "high-speed" Internet service via Cell Phone suppliers although it is not very cost effective.

Both Bell and Cogeco offer faster services although Bell's fastest service is faster than Cogeco's fastest.

Bell has installed fibre to the home in many locations so very fast speeds (3.0 GBps) are available in many parts of Cobourg.  But some locations still have very slow service (10Mbps) - you have to check here.  The above is their middle of the road Fibre service - Note that "Fibe" is their brand and does not mean you will get fibre.  If you do have fibre, you can also get TV and don't need a dish.

It is NOT recommended to use anyone's VOIP or cellular service for your only phone unless you can tolerate occasional outages.

What is your current speed?

Go to this link to test and find out your actual speed. (Independent testing by CIRA)

Wireless service by Cellular is available from Bell, Telus and Rogers offices in Cobourg. Choose depending on availability of coverage in your exact location. Bell's price is typical - $10/month for 100MB/Mth, $45 for 5GB etc - comparable to phone data prices.

Connectivity for Eagle is provided by Bell but server and support is by Eagle.

This comparison is applicable to the consumer level service.
Data above is for services in Cobourg. All supply multiple email accounts.

The Internet is getting to be a service that's as important as a telephone - but there are many questions that are rarely discussed or if they are, they are in terms too technical for the average user.

On this page, some of these questions are answered or at least discussed so you can decide for yourself. 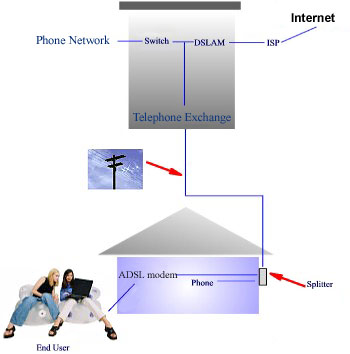 (Diagram at right) ADSL stands for Asymmetrical Digital Subscriber Line - which simply means data by phone line but faster downloads than uploads. In Cobourg, the only supplier is Bell since they own all the phone lines but they provide the service wholesale to Eagle.ca and others. It works by using different frequencies for internet than used for phone then using filters at each end to separate these signals. Equipment is relatively simple - a modem at the user (subscriber) end and a DSLAM at the Central Office (Telephone Exchange). In between is a single pair of copper wires. Likely failure points are the equipment at home (modem) or the cable in between.  Note that Bell is gradually replacing this service with fibre to the home which provides much faster service and is a different technology.

Fibre to the Premises (Home)

This is now offered by Bell in many locations in Cobourg.  Fibre comes to the house where it's connected to Wi-fi which completes distribution to the house.  It is essentially as reliable as wired connections - just much faster.

(Diagram below) Since TV does not use all the frequencies, Cable Internet can and does use spaces between channels. Although wide, these Internet "channels" are shared with a number of other users - much like an office network.

Also, because the system inherently carries a wide bandwidth, there are many points where amplifiers must be provided to boost the signal. Likely failure points are the equipment at home (modem), the cable in between or the amplifiers on the cable.

Satellites can inherently download easily like they do for TV - upload means you need a transmitter and an individual receiver or at least an individual time slot. Since the coverage area is very large, either the number of customers must be limited or the usage per customer must be limited. Also, the user's antenna must have clear line of site to the satellite. In general, the same issues apply to wireless where service is supplied from a nearby tower but because there are fewer customers within range, traffic limits are generally higher.

Because Cable TV Internet has more failure points, reliability is worse than ADSL. Wireless has difficulty because of requiring sophisticated outdoor equipment and rain/snow/ice can also cause outages. See the table below for "standard" reliability numbers. Note that the quoted reliability numbers vary tremendously with particular suppliers and location so should be used for overall comparisons only. They also don't refer to problems like intermittent email or spam which are not network problems. Note the numbers do not mean that (e.g.) your home phone will not work for 5 minutes each year - it could be (e.g.) 50 minutes once every 10 years.

Theoretically, the upper limit for Cable is faster than for ADSL unless ADSL uses fibre in which case fibre is faster.  However, it's much easier for an ADSL network to improve capacity if there is congestion than for a cable network.  Unless fibre-optic lines are used, the speed depends on the distance from the home to the nearest service point - generally a telephone exchange. For Cable, congestion can also occur if too many users are on the one feed line whereas this does not happen with ADSL. Satellite and Wireless will be slower but you usually have it because that's all there is!

This is entirely dependent on the company supplying the service. For cable in Cobourg, you are dealing with Cogeco. If you call support you get someone who speaks good English and who can see if the problem is local or the network - although they sometimes get that wrong. If all else fails they will send a technician to your house. That's because a technician can decide if the problem is the modem, the cable inside your house or the network from your house to their "head end". A problem with the cable can cause TV to also be off but it could be just degraded enough to cause only an Internet problem.

If you have ADSL, you will probably have Bell where the support person has been in India (up till recently) and is knowledgeable but often hard to understand. They rarely send a tech to your house because the connection from your house to their Central office rarely fails. If it does, your phone will most likely also be off-line.

Another popular ADSL supplier in Cobourg is Eagle.ca   Eagle support is available during business hours only but they speak good English and are competent but unfortunately in many cases, they will have to deal with Bell - they can't handle network problems directly.

Satellite service is mostly Xplornet in Cobourg - if a local tech is needed, they will send one out from the local dealer. Wireless can be via Airnet or Xplornet. Airnet have one capable technician who runs the business, does all installations and provides all support.

For more on this, see suppliers page.